UFO: lurking in my sewing closet!

So, I have been trying to clean up my sewing room. A never ending task... but must be done! I need a semblance of organization to get things done.

I had this red/black/pink plaid jacket UFO hanging there for well over a year now and I decided to tackle it and do my best to A, figure out why it is a UFO and B, whatever the reason is, deal with it.

The pattern is from a small independent company. I bought it because I tried on a model garment at the trade show and liked it. I wish I could remember why I really like it and had taken some pictures, or at least wrote down what size I had tried on.

Just For You! by Darlene Miller 'Triangle Jacket'
"your own 'Designer Canvas' Jacket!

Apparently my brain was just not functioning the day I decided to cut out this pattern because I cut it out for an extra-large and according to the measurements on the pattern I only needed to cut for a medium.... hmmmm.... maybe I was feeling fat that day???? Who knows.

The fabric is a cute poly blend plaid slightly open weaved, not very expensive. I think from vogues super sale tables. But, I like the fabric and decided to just be creative and try my best to make it work. I figured worst comes to worst it could be delivered to the trash can (or recycle bin). 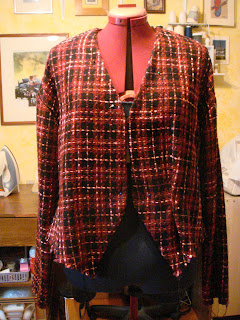 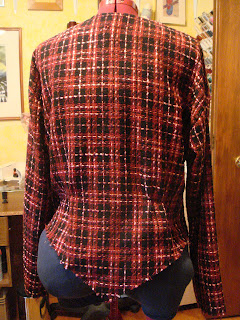 UFO: unfinished back, pointing right to my hiney :-/
It was huge on me, I was swimming in it and my barely c cups were invisible. And the back of the jacket had this point that ended right in the middle of my hiney. Not to flattering.
What this left me with was an interesting short jacket that actually looks quite cute with a black knit tee underneath. It is fitted (sort of) at the waist and then boxy higher up. The side sits just at my waist with the back dipping slightly below in a nice graceful curve and front points extend below waist line. And the sleeves are dropped with a raglan type look to them. 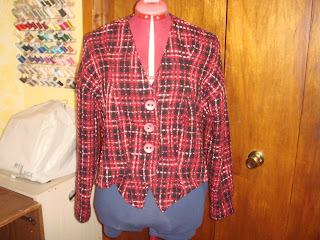 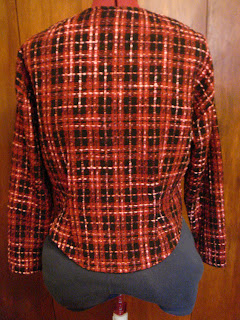 Finished back, no hiney point :)
I do believe that I will try this pattern again...and make sure to use the correct size!! and then I can give it a proper pattern review!
Posted by Stephanie - Siouxzeegirl Designs at 4:11 PM