The past couple of days were pretty productive in the sewing room. Sunday I cut out 3 tops and yesterday i sewed them up.The cowl shirt and waterfall cardigan from Simplicity 1945 and a basic short sleeve summer sweater from Silhouette sweater set.

The Simplicity 1945 is a new pattern for me and I am pretty happy with it. Easy to put together, great wardrobe builder and I will be able to wear it for business casual meetings and events. It isa.so a great crossover piece that I can wear for non-work stuff too. I love versatility!

The orange cowl top is from a knit that I bought at a new fabric store in Indianapolis called The French Seam. It is beautiful, and a delight to work with. The brown alligator tone on tone fabric is a ponte knit that I bought at a Hancock fabrics in North West of Chicago. I think up near Woodstock, IL. There used to be tons of Hancock Fabrics around but most of them have closed.

I also learned that my cover stitch feature is a little temperamental if I do not have a full spools of thread for the needles. I was trying to match the orange and had only just enough thread (literally just enough) and the darn thing just misbehaved and misbehaved. When I finally had enough and loaded it with full spools of brown to do a contrasting stitch instead, it worked perfectly!

I do think if I make the cowl top again I will either make the cowl smaller or use a lighter weight knit. I may also add in a bust dart if I make it again. I'll have to wear the top a couple times before deciding. 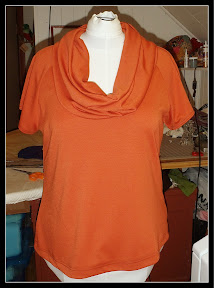 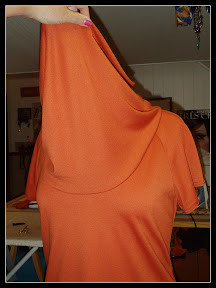 One could hide from the paparazzi with that cowl! 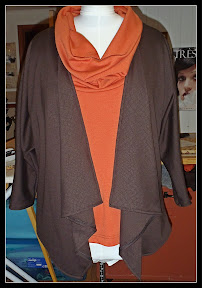 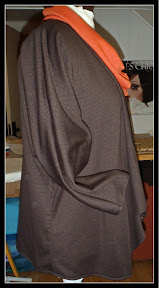 This purple sparkle sweater knit was a remnant that I picked up at JoAnns last year. I think it cost me like $5 and I had been wanting to play with a lightweight sweater knit without spending to much money. The first picture makes it look blue... Not sure why, maybe something to do with the flash. The second picture is closer to the real color. 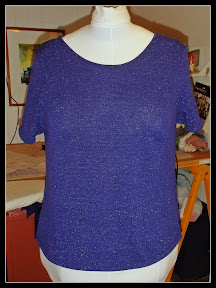 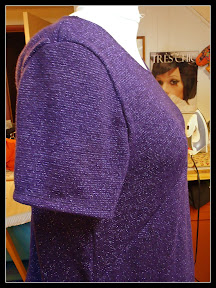 What's next? Well I am still working out the closures for my sweater set cardigan. Buttonholes are a no-go on that knit. I tried several types on a practice piece and they were disastrous. I am looking at some clasp closures, I bought a set of 2 from JoAnns and had to spray paint them the color I wanted with some rustoleum to get them even usable. Still deciding on what to do. 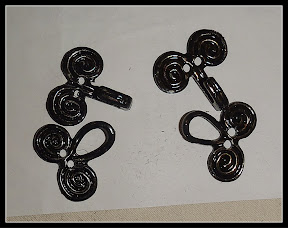 I have a couple more knits to play with and then I think I will move on to structured jackets. I have a nice stash of wools that will make some great work jackets with enough fabric left over for pants.

On my way to Tampa for work for a couple of days.
Happy Sewing!


- Posted by Steph from my iPad

Posted by Stephanie - Siouxzeegirl Designs at 9:02 AM