At the beginning of this pandemic in the US, about mid-March, and prior to the mask making craze, I really wanted something to sew but was having trouble making decisions. There was soooo much up in the air about what was going on in the world and how we would be affected. My work table was overflowing with things that I was getting ready for Sew Camp Wardrobe Week and my brain was feeling overloaded. 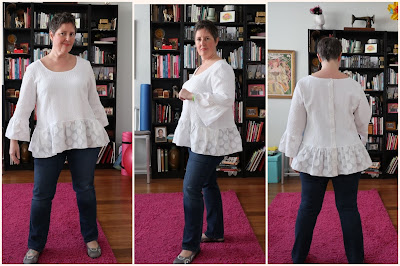 SO a 1-2 punch combination of Sew My Style 2020 March patterns and The Sew and Tell Podcast (A Great sewing podcast!!)  #sewyourroll challenge was just on the podcast so I decided to just combine the two and not think about it or everything happening in the world and just SEW!!


It was a bit heavenly to just SEW- follow along with pre-determined guidelines and make it work. I Think it was a solid fun win.

The Sew and Tell Pod  #sewyourroll challenge is a dice game where you had to roll 3 times and then use those numbers to pick items from a list. I had no dice so I used a handy number generator online. Basically the outcome was that I needed to sew:


With a POCKET detail 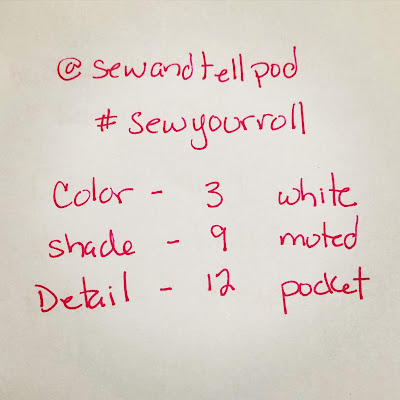 I had already decided that I was going to use the Gelato Pattern for Sew My Style March 2020- the Gelato Blouse and Dress and I knew I wanted to use only fabrics from my collection. I don’t sew with white very much at all and had 3 white fabrics to choose from. This made it easy to make decisions. I also took the time to make a sketch using My Body Model croqui on my iPad. This gave me a pretty good idea of what I wanted. You will notice that the top is a little shorter in my sketch than in real life. If I made it that short the flounce ends at my widest point and I didn’t want that. 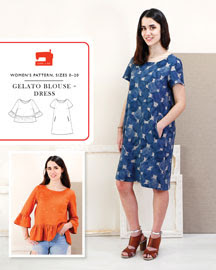 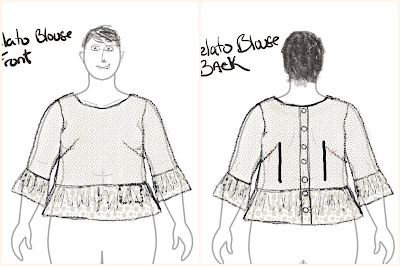 Most of my sewing is done with my own patterns and my own designs, this also gave me the opportunity to play with my ‘skills’ of taking what I know about patterns and fitting and translating that to a new purchased pattern. I also wanted to point out that this pattern uses a different seam allowance than I am used to, ½ inch. In order to keep that difference in mind I placed a piece of painter’s tape across the throat plate at ½ inch. 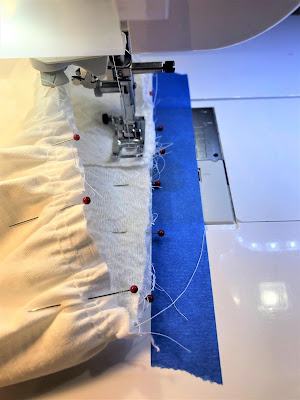 For full disclosure I made changes to the pattern using my base pattern and decided to jump in without making a muslin. The biggest changes I made was to the armhole- totally different. I decided to keep the same sleeve and just make adjustments to it to increase the width to what I need with a one-piece sleeve. This was a bit of a gamble because I would be lowering the cap height but I think it work it pretty good overall. I think a smidge more cap height would be better but for this testing of a one-piece sleeve it came out pretty good. 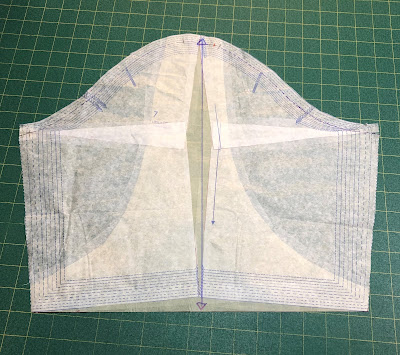 The neckline that I used was the one from the pattern but I used the one that was the lowest- disregarding the size. I also added back fisheye darts to keep the fit a bit more flattering and from having too much fabric pooling around back there. I purposely wanted this top to be a bit boxier and loose and cool for the summer. Plus, I wanted to play a little bit with a boxier silhouette BUT still have a shape. In order to achieve this, I used slightly smaller back fish eye darts and only one bust dart instead of my normal 2. SO the overall shaping was a little bit less and an intentional part of what I wanted to achieve. The shape was boxier but NOT revealing!! 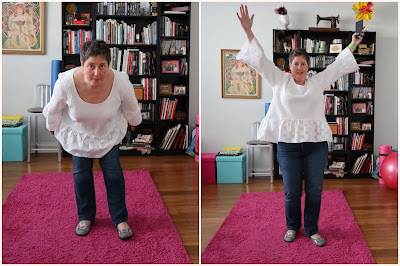 For this white top I played with 2 different fabrics and gave it a lot of texture and not just look like a flat white wall! The main fabric is a cotton white textured fabric. It has some small technical give due to the textured weave. The Sleeve and hem flounce is a very soft cotton lawn with a large white clipped circle woven in. I will be 100% honest and I don’t remember where I got these fabrics. The cute white buttons are from my button stash. I had to adjust the spacing because I had one less button than called for. 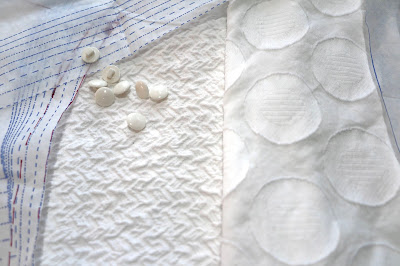 For the pocket detail I added these as hidden pockets at the front side just under the ruffle.  To cut down on the bulk I cut the pocket as a single piece that was extended right from the bottom of the front bodice. These were then folded up and side seams of pocket sewn. When I sewed on the bodice ruffle I carefully stitched just the top of the pocket. To finish it off I added a bias loop and button to hold the pockets closed. 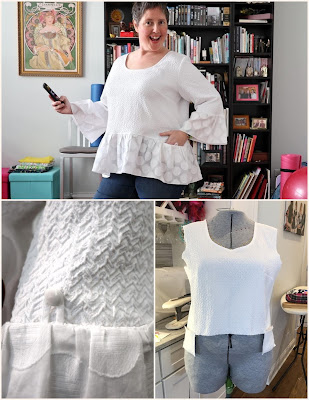 Along with this I shaped the front so that it was shaped and higher in front and angled lower to the back. Sort of giving it an upside down flattened ‘U’ shape. I’ll admit that I was slightly worried that I this would make it look a little bit like a maternity top! However, I think it was very successful!!


In the back of the top I wanted to make sure that I had enough room for movement. Especially with the fact that there are buttons down the back. I find that the width of my back varies much more than the width of my front with regular movement. Since this button placket is not actually needed I did toy with the idea of sewing it down and making it non-functional. However, in the end I decided against that and made full button plackets, with buttonholes and fully functional, even though I don’t need it to put the top on or off. I also added one of my last little white labels. 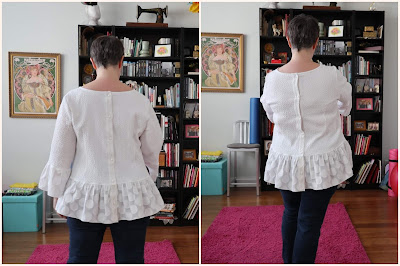 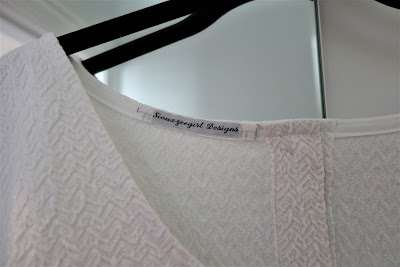 I am actually very delighted with my white top! I didn’t think I could pull it off :) It really makes me smile every time I put it on and smiles are precious right now! 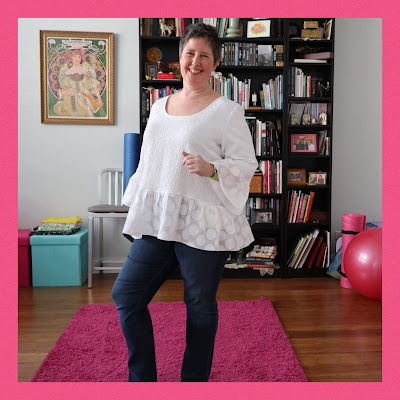