"Hey Stella" oh this top instantly makes me think of Brando in Streetcar named Desire. The scene where he grabs his head with both hands and yells, "STELLA"!

Well, actually it was more like the fabric made me want to grab my head and yell.

I used a nice weight poly/ rayon blend and I had just enough fabric to properly cut out all the pieces on grain correctly. The fabric was a bit shifty, always slipping off grain when not being watched. However it did sew up quite nicely, all except for one part. I was worried about setting in the cowl with that triangular piece on the bias being set in, but that came out wonderful! The only piece that gave me hell was the lower third of the left front. Lay it flat and it matched the right front perfectly. Sew it together and hang it vertical and ohhhh what a wreck. I was so careful to keep everything on grain but somehow this piece just was whacky. If I had more fabric I would have taken it all apart and re-cut a new left front.

I really should have taken a before picture! The left front sagged more that half an inch longer in some spots then anywhere else and made a funny ripple at the bottom third part of the front seam. I made do the best I could and my picture here is easily 90% better then it was before I fixed it. And the good part is that when I have it on it's not really noticeable. I'll put up a picture of it on as soon as I get someone to shoot one.

All in all, I like the top very much. I even think I will make it again. Depending on the fabric choice this could make a good work top or a great weekender hang out top. Very versatile!

The first picture makes the center front hemline look way worse than it really is. But you get the 'picture' still a bit wavy but at least it is now even and not pulling forward and when it is on me it seems to straighten out more. 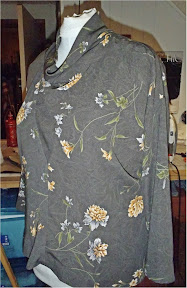 A close up of the bias cowl insert. If I was going to have any issues it should have been here. This actually lies beautifully. 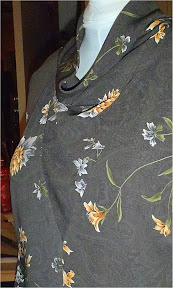 Even the long CB seam came out very nice. 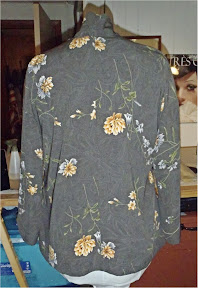 I will have to try the blouse out on a trial wearing and see what I think and if that center front bothers me or not.

- Posted by Steph from my iPad