This week of working from home and no travel has been quite nice. I have been able to play in the sewing room and the kitchen after my work is done. 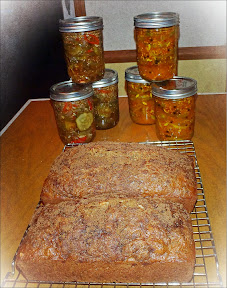 It will not last long, I leave tomorrow afternoon for 5 nights in Charlotte, NC for a big work convention/tradeshow.

Anyway... On to the Pickles. I checked out a new book from the library on small batch preserving, Food in Jars. It has some interesting recipes, nice photos and cute anecdotes on the history of various types of methods and how they developed. Only problem is that it is slightly too small batched. For the amount of work it takes to do water bath canning I would prefer bigger amounts. So with that in mind, I used this small batch method to play around a bit. I figure with only 3 pints from each batch if they come out horrible not such a big loss. ;) 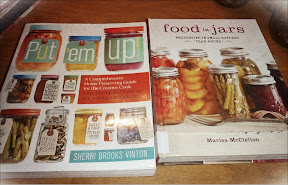 Both were variations of Bread and Butter pickles.
The first was made sweeter with apple cider vinegar, red sweet peppers along with fresh dill heads. 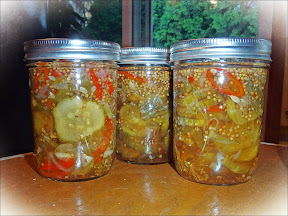 The second was made with hot Serrano peppers sliced in half and red pepper flakes and turmeric. So more of a spicy/ savory type. My hope is that with the addition of the hot peppers that these come out with a kick! 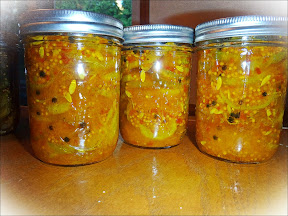 And then of course I had to make some Zucchini nut loaf. It is so darn yummy and I was able to use up one of my very large zucchinis that seem to pop up in the garden overnight. 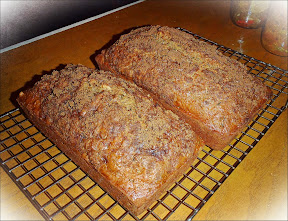 The heat we have been having this summer has been very difficult on one of my cucumber plants. This particular variety just doesn't seem to like their when we go over the 100' mark. It has nothing not do with it being dried out either, it's just that the plant itself doesn't tolerate that high heat and just withers. 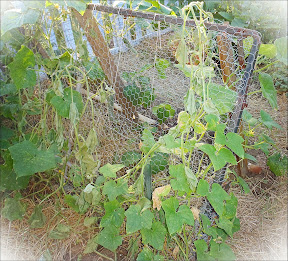 Good thing I like to plant a variety of plants!


- Posted by Steph from my iPad

Posted by Stephanie - Siouxzeegirl Designs at 9:11 AM