19 ladies joined together for an unforgettable trip to Hong Kong and all for one big reason, FABRIC!! You know you have the sewing bug pretty badly when you fly to the other side of the world to go fabric shopping and bring home 56 plus yards of amazing fabric! 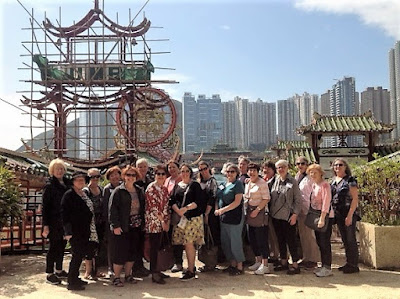 Our guides, Linda Griepentrog and Pauline Richards, did an amazing job of not only getting us prepared for the trip but also giving us so much information about the areas we were visiting, they really made the trip very enjoyable! I really enjoy traveling and I also like having my freedom without having every last detail planned out. This trip was a great mix of scheduled activities along with plenty of free time. If free time in a foreign city is intimidating, not to worry! On the scheduled free days there were several different optional tours that you could sign up for.


The flight is along one from the states, about 16 hours from gate to gate. Going there, I met the majority of the group in San Francisco and one the way back I flew directly from Hong Kong to Chicago. The jet lag going there was not so bad, mostly because you are excited to be somewhere new so fighting off the sleepies was not too bad.
Going home…. that was another story.


The accommodations were excellent. I really want to point that out since the hotel, The Salisbury Hotel, is technically a YMCA. If that was not pointed out to me I would never have known! I chose to be paired with a roommate who I have never met before and that worked out wonderfully. My roommate and I got along so well and we had so many things in common that it was like staying with an old friend. As part of the accommodations we had a scrumptious international buffet breakfast every morning. I love international breakfast buffets, all the yummy foods, it was definitely the biggest meal I ate every day.


Let’s get down to the good stuff!
Day 1: morning orientation meeting (very good and comprehensive) followed by a tour of Hong Kong Island. Victoria Peak, Stanley Market, Aberdeen Harbor and Boat ride and Western Market with fabric vendors. Transportation for the afternoon was done via coach bus. Quite a good way for us to go from place to place without having to worry about a thing. This day was a basic tour of the top Hong Kong sites with the Western Market thrown in for us fabric junkies! 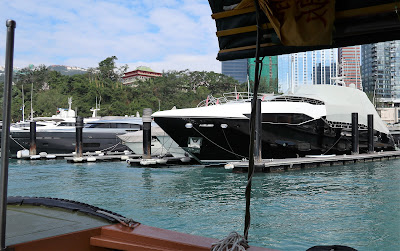 Day 2 morning: Tour of Costume shop. This was very cool! It was a working costume shop that made costumes for Hong Kong Disney and the other theme parks in the area plus movies and other such operations that require costumes. We started with a demo/lecture on using lighting in costumes and then a tour of the workrooms. One of our group even got to dress up in an inflatable costume! Quite fun! In many of the areas we were not allowed to take photographs due to non-disclosure contracts with the companies. We were allowed to photograph the actual sewing workroom and all I can say is WOW!!! Some sort of controlled chaos! Very, very interesting to see. They even had a remnant sale for us of some really beautiful costume fabrics. I brought home a couple of pieces for the Princess. 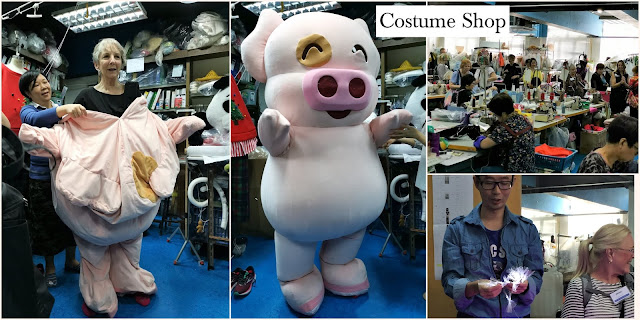 Day 2 afternoon: FABRIC SHOPPING- was spent in Sham Shui Po. We were given a map on our way over there on the bus. Linda and Pauline pointed out their favorite shops and places to explore and then we were let loose! We all met a couple hours later at a designated meeting spot for the bus ride back to the hotel.
This afternoon was amazing! Although, I never actually made it to Linda and Pauline’s two favorite shops. Sham Shui Po is the Hong Kong fabric/garment/fashion district. It was honestly a bit overwhelming because there was so much to see and so unlike shopping for fabric anywhere else that I have been. It ranged from a bazaar set-up to street vendors with large push carts of fabric to both wholesale and retail shops. The shops were the most familiar type. Very similar to shops in NYC garment district. The street vendors were fun! Due to the language barrier you bartered on price using a handheld calculator! I enjoyed doing that! The bazaar was a bit crazy and sort of like shopping in a giant tent ! I really would have liked to do more exploring in there, just ran out of time!
We also visited the Jade Market that afternoon and a food market. The jade market was my least favorite stop on the itinerary. The food market was extremely interesting and quite fun to walk around! 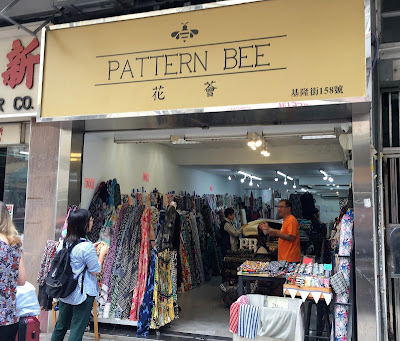 After all of that excitement, we had a quick bite to eat and then a bunch of us went with Linda to a tailor. Yes, I went to a tailor and had 2 suits and 2 extra pairs of pants made for me, custom. Such a super fun experience!


Day 3: After breakfast most of the group went for an hour long outdoor Tai Chi lesson. This was a blast!! Our teacher, William, was so graceful and gracious. We were out in a public plaza near the harbor and attracted a small crowd of onlookers, what a site we must have been :) 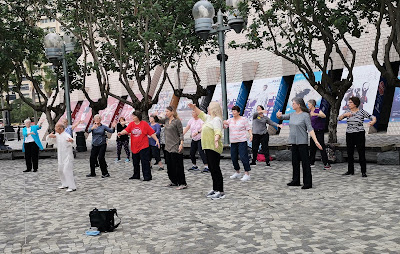 In the afternoon we took take the train system over to Hong Kong Island and do some shopping in the main district. My roommate and I stayed together and found another great fabric shop, Fulee Silk & Piece at 25 Li Yuen St in Central Hong Kong, I bought several lengths of delicious silk from this shop! Sadly... No pictures of the shop. But here are two of the fabrics. 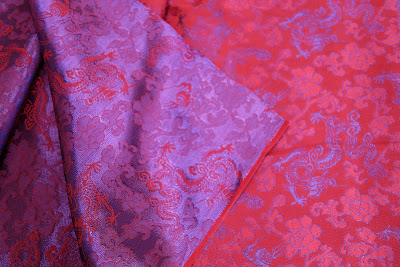 It was interesting that there were several streets that had street signs and everything but they were actual staircases and there is even a very long outdoor escalator that switches direction depending on the time of the day. 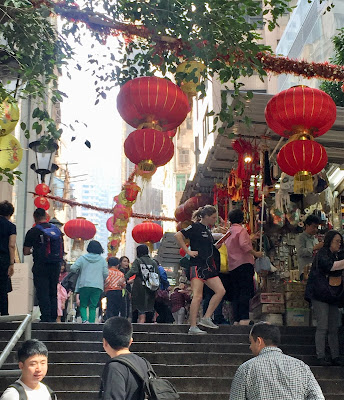 We then found a great little hole in the wall restaurant that only had menus in Chinese. Thankfully most people speak at least some English so we were able to order a delicious lunch. In the afternoon we took the famous Star ferry back across Victoria harbor. 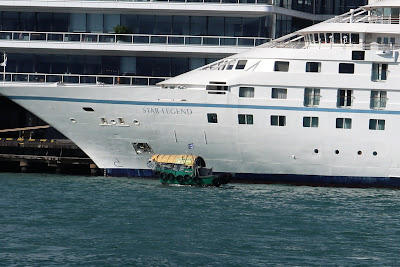 That evening we ventured out to the Ladies Night Market. This was a street market that ran for quite a few blocks with vendors set up on either side. You could buy all kinds of stuff! Clothing, purses, souvenirs, electronics gadgets. Mostly sort of touristy and knock off items.

Day 4 and 5: These were free days and you could either sign up for optional tours or just go sightseeing or wander about on your own or with your new friends! More on this later!


Day 6: Last full day of the tour- and it was splendidly warm and so much fun! My roommate and I spent most of the day back in Sham Shui Po. While here we went to a button/fastening hardware shop and oh my! What fun we had in that shop!! After that and a quick detour to an ATM cash machine we found a zipper shop and purchased some fun items there. 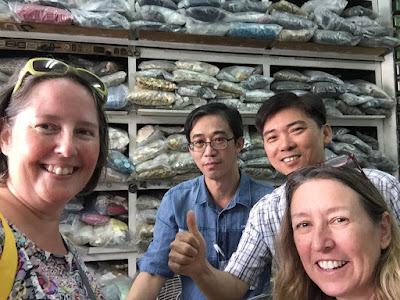 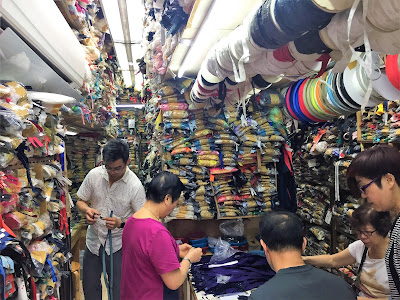 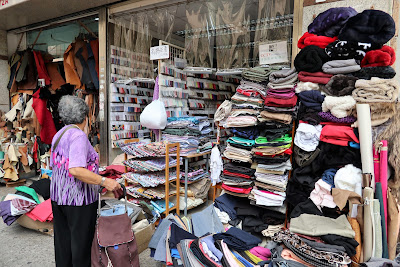 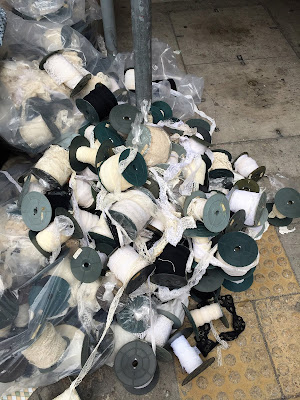 We also found a bag/luggage shop that was amazing! We both bought several things, some gifts and some things for ourselves and I bough a very big suitcase. We then headed back out onto the streets and did some more fabric shopping. I did have a big suitcase that I was hauling around so it made sense to get some more fabric to put on it! LOL!!

After a quick stop at the tailor for a fitting we all met together to head out for a harbor cruise and a farewell group dinner. June, our lovely land guide, spent the time with us and took lots of photos. We took the boat out into the harbor and watched a beautiful sunset as we sailed over to a small island that has a wonderful row of restaurants built out over the water. Each restaurant had an array of fresh seafood… so fresh that you could go right to the fish tank and pick out what you wanted to eat! Now that is fresh seafood. After our lovely dinner we were picked back up in time to make back into the center of Victoria Harbor for the famous Hong Kong light show. It was quite spectacular and I mostly left my camera in my pocket and just enjoyed the amazing lights and laser show that spanned both sides of the harbor. It really was a special way to end the tour.


Day 7: The Sew Much Fun Hong Kong tour was done and I highly recommend it to anyone that wants to go experience this amazing city with a great group of like minded people.


The tour was over and as the others made their way to the airport, I made my way back out into the city and then moved hotels across the harbor to spend a couple extra days to do some more exploring and sightseeing.