Happy 2018 everyone!
I am starting off the new year with a blasted head cold that has me suffering through sinus headaches, using an endless supply of tissues and trying all the different cold remedies. The temperatures in Chicago are brutal right now so at least i'm not feeling bad about not getting fresh air. Wind chills of  -20 F have left me snuggled up in my place getting lots of rest.

I have also had the time to go through my holiday pictures and reminisce over my trip to Europe that I went on for the week and a half before Christmas. I had such a wonderful time!! I spent a couple days in London and then went on to the Netherlands to spend a week with my brother, sister-in-law and niece.

As I look back at everything I did over those 11 days, I feel like it should have been too much! But, it really wasn't at all. I had some things I wanted to do and some things on the would like to do but not necessary and then plenty of unscheduled exploring time. I could write a blog post on each and every day! Since this blog is mostly about sewing I will share the sewing side of the trip :)

I started in London for a couple of days. So most surprising thing about London: The Christmas lights and decorations!! London goes over the top and it was so awesome and so much fun and you just couldn't help but to smile and look around in wonder. They even have an entire webpage devoted to where and when you can see Christmas lights all over the City.

What else did I do in London:


Balenciaga exhibit at the V&A was very well done despite, what I thought, was a relatively small sampling of his creations. It was well curated cross section of his design career and was done very interestingly. It was broken into 2 parts. The downstairs was all his work and then the upper level was all designers that were inspired by him and some that also had similar work. A very wide range of garments as well as 2 video large and loud video screens with looping interviews with new and current fashion designers as to how Balenciaga has inspired them. It was interesting and had some lovely creations but really felt more like they needed some filler to provide more for the price of the admission.

Another highlight of my trip- Liberty of London!
I arrived in London and to my hotel by early afternoon. A nap, a shower and then I was off to the Liberty shop :) It was the only actual shopping that I did in London other than books from the exhibits that I attended. I spent almost 2 hours in the shop. It was very cool, eclectic and unlike any shop that I have ever been in. Each area was so different and the building itself was so charming. 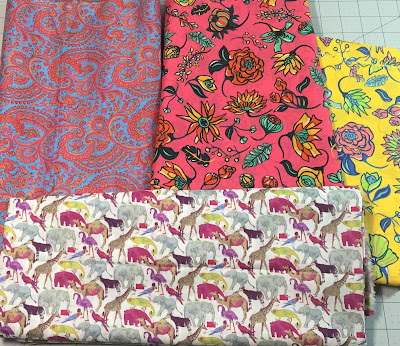 The top picture is of the Tana Lawns: Starting top left going clockwise- Liesl from the Alpine Symphony seasonal collection, 2 Winter Florals (pink and smaller piece for contrast in yellow) from the Garden of Temptaion collection and then a piece for the Princess,
Que for the Zoo from the main Liberty collection.
Below are 2 silks that I could not pass up!
On the left is Tresco in a silk Satin and on the right is Turtle Thief. 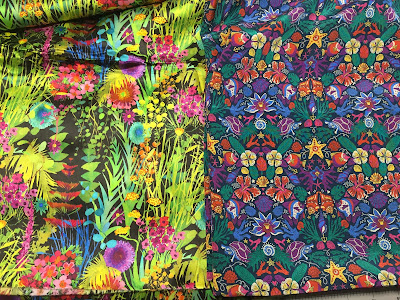 After London I headed over to The Netherlands to spend time with my younger brother, Willie, and his wife, Lide, and their daughter, Roxie.

This too, was an amazing time! We had so much fun together and it was relaxing and I loved just getting to see and experience where my brother and his family live. Some things very similar and some things very different! 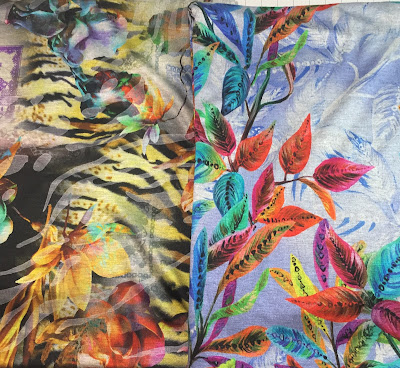 I also found a great button and notions shop in Utrecht (okay so my SIL showed me this shop... I'm just excited that I found my way back to it on my own!) These buttons are so cool and colorful and the best thing they are NOT plastic. they are shell that has been printed on.Very cool! 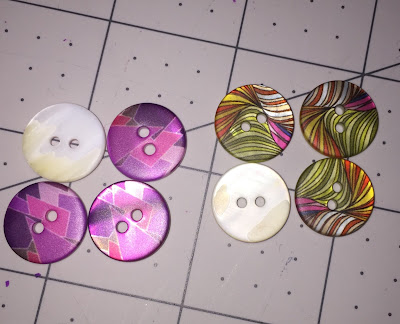 I had a free day to myself in Amsterdam and had a list of places to go to. I only made it to half the list! The Albert Cuyp market and the Van Gogh museum. I had several other fabric shops in another part of the city on the list but those will have to wait for the next trip! Probably a good thing since my suitcase was quite full from the purchases I already made! LOL!
The Albert Cuyp market  was quite large, entertaining and had quite a few fabric shops/vendors as well as many other vendors! It was interesting as some of the vendor stalls were walk throughs to get into the shop associated with it and some were strictly tent vendors. Most of the fabric vendors also had shops and did a good job of showcasing sales or specials in the tent which enticed you to go inside! Of course my very favorite fabric shop in the market, Nanucci Tessuti, I did not get any pictures of because I was too busy trying not to drool on the amazing fabrics!

SO in a nutshell... that was my fun and happy trip to Europe for the holidays!

The Princess playing tea with her stuffed animals and baby doll! 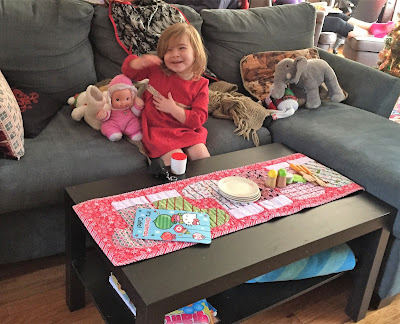