This year my husband I had two Halloween parties to attend. One of them was at our dance studio and the other at our next door neighbor. We ended up going as Maleficent and Prince Phillip. 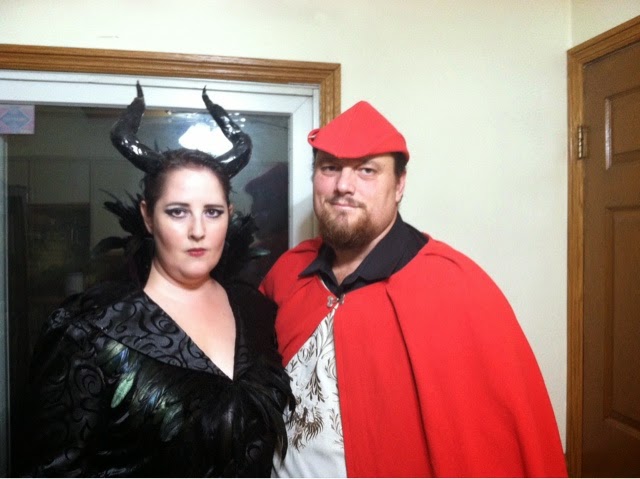 I decided early on that I really wanted to be Maleficent for the festivities :) normally my husband and I usually throw a big Halloween party but for some reason this year I just was not feeling all the 'work' this year. I know... A big bah humbug for Halloween!
However, I could not pass up the opportunity to whip up a couple costumes!!
Remember those feathers I bought in San Franscio? Well, they have been put to good use! 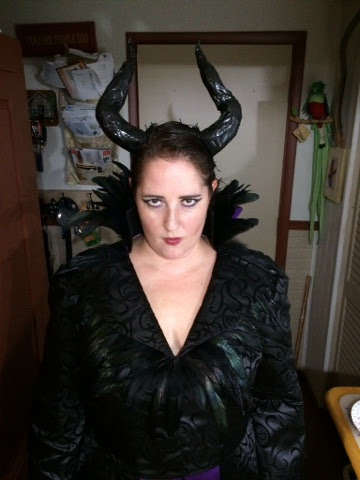 My costume was no quick project!! However, it was fun to make and I even learned a new technique.
I used McCall's 6818 as the base pattern for the Coat Dress. The pattern states that this is a coat and cape pattern. I made some adjustments to make the coat into a coat dress. Most of the adjust,nets were in the bodice. I raised the v neck up 2 1/2 inches so I would not have to wear a camisole under. I also lengthened the entire bodice by almost 2 inches at the front tapering to an inch at the back so that the waist seam actually sat at my waist. I also closed up the back slit by a couple of inches. The original pattern has it open in the back going almost all the way up. Since I was not exactly sure what I was going to wear as an under layer I decided to close that slit up so that it only opened to my lower thigh. This also kept the illusion of a gown better!
I cut 2 collars and made them slightly bigger and interfaced them with some leftover stiff paper type interacting from bag making. These made them stand straight up and I was able to shape the edges with a steam iron, came out very cool! 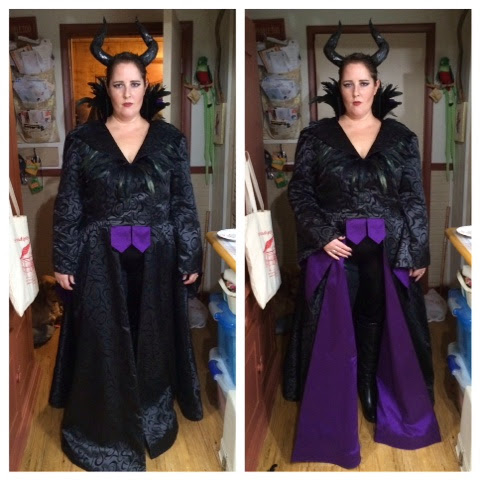 The last thing I did, which was a brand new technique for me, was the addition of 3" wide horsehair braid to the hem. It took a bit of extra time but Was SOOOOO worth it! It made it feel so much more like a gown without having to wear petticoats or fluff underneath. 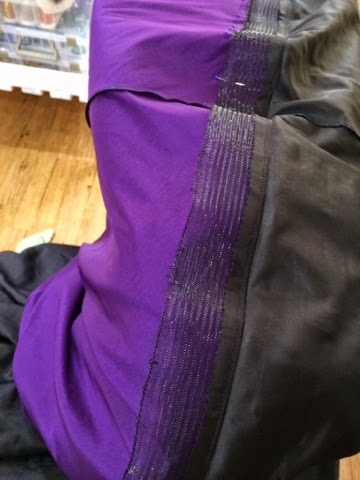 Fabric for this project all came from fabricmart. The black with black glitter flocked swirls was from a super sale for 1.99$ yard!!! Score! I bought 10 yards. I originally intended to also make a cape out of it but that would have just been sooooo much costume! The cape is actually all cut out and with that I used 8 of the 10 yards on this costume!
The lining accent is a royal purple taffeta also from fabricmart. I used almost 5 yards on this project. The taffeta was perfect because it had a nice heavier weight to give this dress some heft to it. 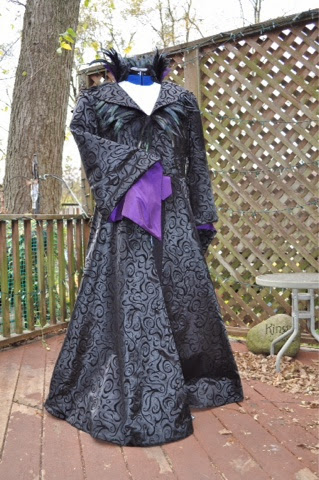 For underneath I finally decided that I wanted to make a pair of leggings. I had McCall's 6173 leggings pattern in my stash so I decided to give it a try. I used fabric I picked up from JoAnn's a black shiny Lycra from the dance/swimwear area. These worked out great! 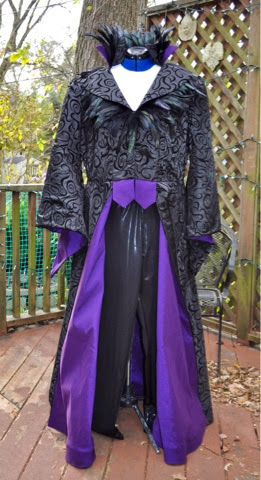 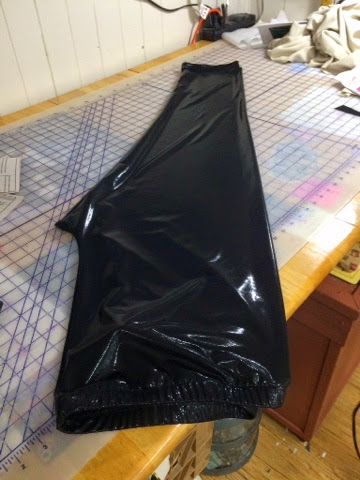 Ohhhh... So shiny! Maybe I can pair them with a long fancy tunic for a New Years outfit.....
The last part of my outfit is the horns, oh those horns! I originally ordered a pair of horns from an etsy shop back in the middle of September. Hmmmm, etsy site said 30 days for delivery of horns by my estimate they should have been in my hands by the latest October 20th.... That did not happen :( such a bummer. The horns showed up after my parties. On the bright side the etsy dealer gave me a full refund and I returned the box unopened.
Did I let this set beach deter me???? NO WAY!!! I got back my 36$ from the etsy dealer and purchased a wide headband  and a roll of aluminum foil for under 5$! Deal in my book and I think my horns came out quite well. The horns are made of aluminum foil, shaped, covered in partners tape, gorilla taped to the headband and then sprayed with black spray paint! A little help form my son in law in getting the final shape correct and magic! An awesome pair of horns that were light and stayed put with Bobbie pins all night long! 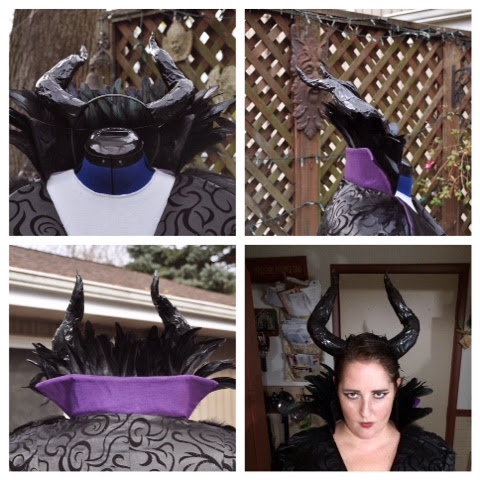 My daughter was a champ and did my makeup for me! Thank goodness for Google and makeup tutorials :) we had fun and I think this was the first time I ever wore fake eyelashes. It sure was fun!
Next up is those feathers. That feather trim from Britex worked out like a dream. It was such a nice quality! I had no problems with feathers falling out or the trim coming apart :) to attach the feathers I sewed small snaps on the trim and the matching end on the dress. The feathers are removable. 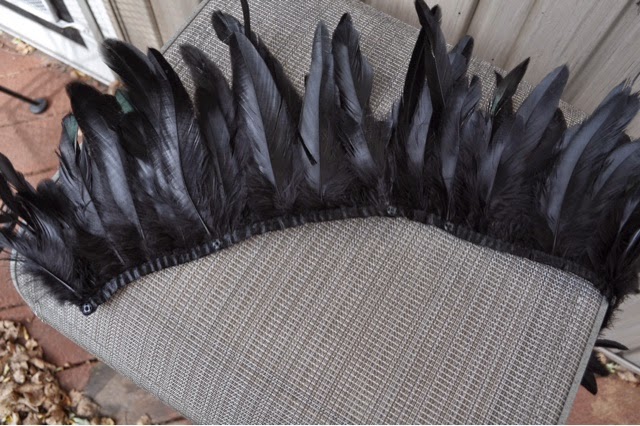 This was such a great project! And one that will be packed away carefully for future Halloweens :) 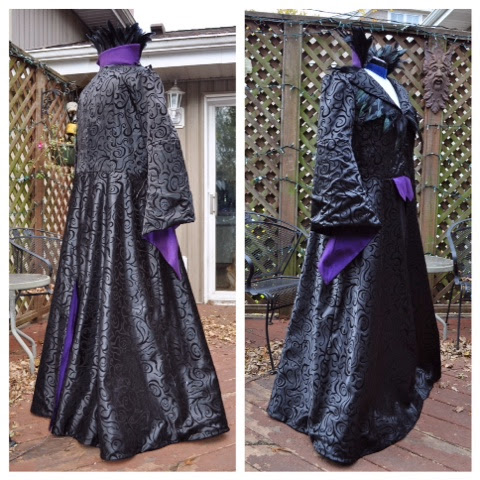 Now my husband went as Prince Phillip. He wore a pair of brown pants and a black button up shirt underneath.
The cape was from another McCalls pattern from my stash. It was for a long cape that I shortened and it originally had gatheres (it was from a woman's pattern) so I changed them to pleats to make a more manly look.
The fabric for the cape was also from fabricmart. It is a soft canvas. So very soft and actually quite cuddly! I'm glad I overestimated and ordered too much. The color was described as Tomato red. It should have been described as un-ripe tomatoe red!!!! It was actually pinky looking. Fit dye to the rescue and I dyed the length needed for this project a true scarlet red! 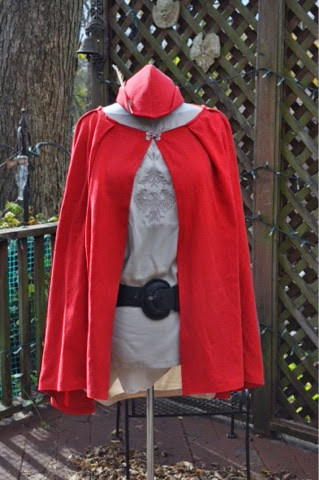 The tan tunic was self drafted by me :) yippee! So easy to do!!! Just one long length with a neck cut out and sewn up the side seams with holes left opened for the arms. Before I sewed up the side seams I finished the armholes and neckline and added the tone on tone embroidery. The embroidery was my husbands idea! And I'm so glad I added it because it looks great. I used embroidery designs from Anita Goodesign and Urban Threads. 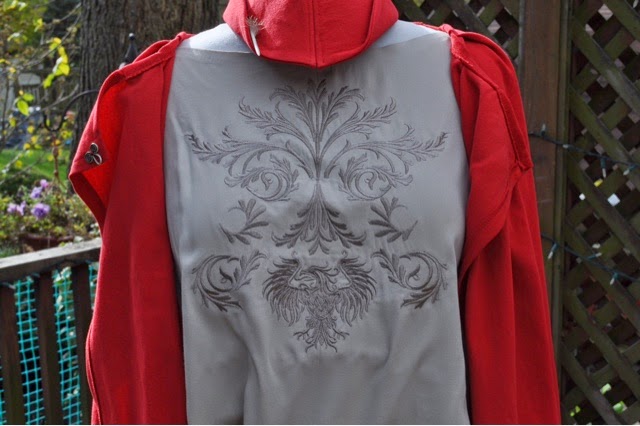 Hehehe! Disregard the boobs on my dress form ;)
The hat was the last thing on the list. As I was contemplating what to make I was searching google for ideas and I stumbled upon a great tutorial from craftystaci.com! I ove free tutorials for these type of things!!! I didn't have to re-invent the wheel :) she even includes a free downloadable PDF pattern for her hat.  I made a few slight changes to the construction because I needed to interface this very soft canvas to make it work. The feather I picked up from a new Hobby Lobby that has just opened near us. 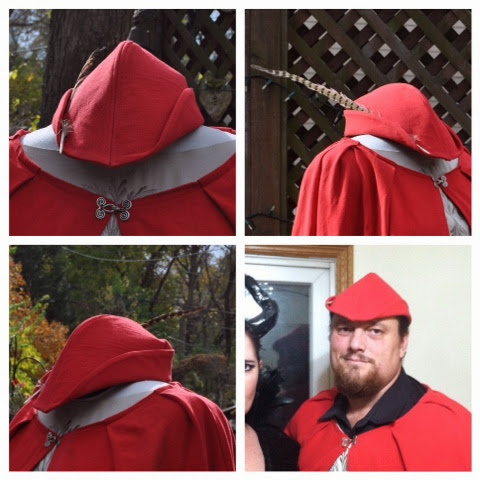 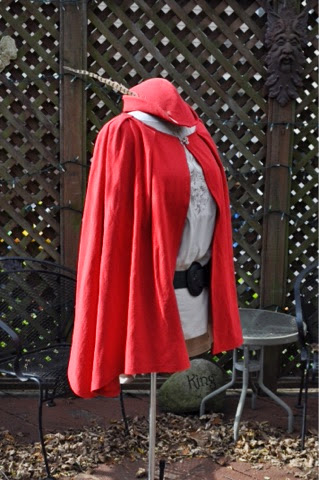 I hope every one has a Happy Halloween!!! 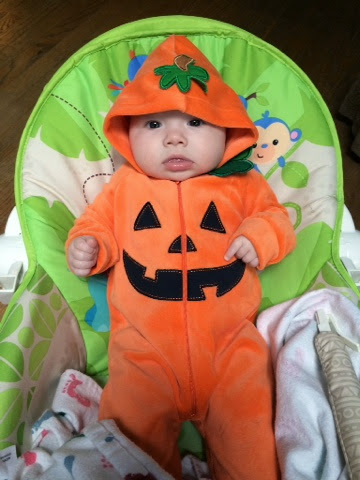