Not quite a Little Black Dress! 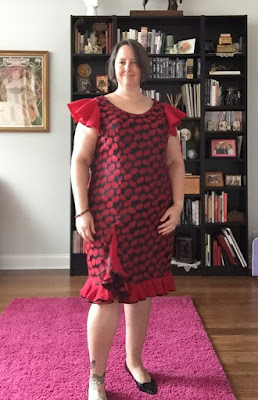 After little black dresses are very, very, well very black. In my head black is for bad moods, funerals and mourning and for those morose years when the world is out to get you. My closest to an all black ensemble is my car wash skirt and French jacket. I do have an old black knit dress that I seldom wear. I occasionally use it as a bathing suit coverup. Now don't get me wrong... there are some very beautiful black dresses and I know many people that just rock a great LBD and I actually have worn one or two in my lifetime. It's just that right now, I prefer to wear more color :) 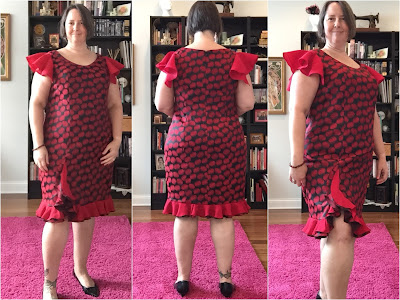 This version of my little black/red dress is made with a soft brocade fabric that I purchased 2013 from a shop in Chicago suburbs that used to carry a small section of garment fabrics. It’s original purpose was to become a dress for my daughters Chicago wedding reception. We decided the fabric was a bit too serious for her idea of dress. So, it sat and marinated in the fabric collection for a while. When I pulled Fabrics for my envisioned little black dress this fabric just kept jumping up and down and yelling pick me, pick me!!! And so I know have a fun new dress. 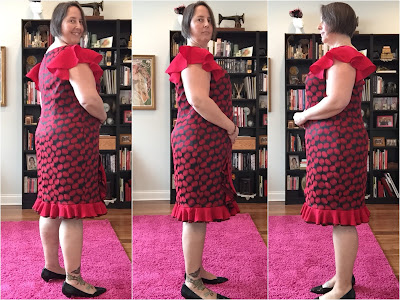 The pattern is from my master princess sheath dress. I changed the neckline to a scoop neck, gave more waist definition at the side seams, added a slit to the right side front seam and shortened the length just a bit. The facings are of the brocade and the rest of the lining is black ambiance. The bottom flounces are an under layer of the brocade and an upper layer of red silk georgette. The sleeve flounce are red silk georgette with a facing of red silk organza. 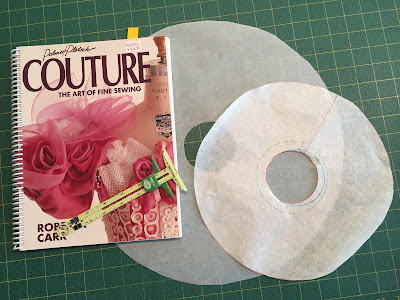 This was the first time I have made flounces by cutting circles. I used the Roberta Carr- Couture, The Art of Fine Sewing book to help figure out the size and number of circles that I would need for my circular flounces. The hem on the flounces at the dress hemline are done with a 3 thread rolled hem with black thread. The brocade hem was easy and I almost was going to to do a second round on top of the first one because there are some pokies. In the end I decided not to because it is at the dress hem and the bottom layer and it took a long time to hem that entire length! The georgette was a bit trickier to do a rolled hem on, I had to go much slower and make sure that the fabric did not slip away from the needles after passing the knife blade. Again this was fine for the hem of a dress.

For the sleeve I really needed to make sure the hem on the georgette was clean and well done since it on the sleeve and pretty much at eye level. To figure out the size of the flounce I draped some fabric on my dress form with the main portion of the dress completed and decided that I wanted to go from halfway up the front to halfway down the block. I measured this length and then made sure to cut the flounce with the same length plus seam allowances for the facing. I cut both the georgette and the organza the same size seamed them along the outer edges, flipped, pressed and sewed to the dress.

My initial thought was to make the flounces as a removable ornamentation with small snaps. However, once I pinned them on I really just loved them and decided that the dress needed to have flounces! This made the end of the construction much easier since I would have needed to sew on dozens of little snaps.


The armhole is finished with a bias facing and the sleeve flounce was sewn on and the seam allowances hand tacked to the bias facing. This could have been done a bit different however since I had originally thought to make these removable I had already finished the armholes. This means the inside is not as clean as I would have liked but that is just fine! 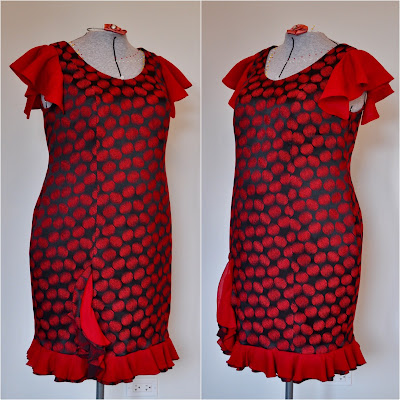 Something very interesting happened with the sleeve flounces... I really love, like love LOVE them on the dress when it is on the dressform. I really like them when I am moving around but I really DISLIKE them in the photo's when I am just standing still and it is a static image. I knew in myhead that this may be an 'issue' and is all bout my head trash and body image. the flounce sleeves draw attention to my chubby white upper arms. Sounds silly as I write it but it is true. I actually played around with lengths and when I draped them on my arm at a longer length I started having 1990's flashbacks and that was so not a good feeling! LOL!!
So... I think I will just have to get over my head trash and move on. maybe also do some exercise to firm up those jiggles!

I have a wedding to go to in April and I think this dress fits the bill perfectly.

Maybe one day, I will finally get around to actually making a real Little Black Dress!